About 35 km (22 mi) south of Grosseto, the capital of Maremma, lies the charming town of Orbetello in the middle of the eponymous lagoon.

Orbetello is connected to the Promontory of Monte Argentario through a bridge that crosses the lagoon and divides it into two bodies of water (East and West lagoons). Until 1944, the bridge also had a railway that reached Porto Santo Stefano.

Orbetello was an ancient Etruscan settlement, which in 280 BC passed under the control of the Romans, who had founded their colony of Cosa (read more about the Roman ruins of Cosa).

After the Middle Ages, during which it was a possession of the Aldobrandeschi family, Orbetello was part of the Sienese Republic, then became the capital of the State of the Presidi (Spanish possession), and later passed to the Grand Duchy of Tuscany before joining the Kingdom of Italy.

Orbetello was the starting point for Italo Balbo’s “air cruises” between 1930 and 1933. Balbo was Italy’s Marshal of the Air Force under the Fascist rule, a time during which Italy was greatly interested in aviation. His first transatlantic flight involved twelve flying boats from Orbetello to Rio de Janeiro. The second one had twenty-four flying boats on a round-trip flight from Rome to Chicago, passing through Orbetello – Amsterdam – Derry – Reykjavík – Cartwright – Shediac – Montreal.

The first thing you will notice when reaching Orbetello are the city walls that surround the historic center. They date back to the 5th century BC!

The Cathedral of Santa Maria Assunta (Duomo di Orbetello) was built on top of an Etruscan-Roman temple and later restructured in a Tuscan-Gothic style. It houses some notable 15th-century frescoes.

The Palazzo del Governatore, located in Piazza Eroe dei due Mondi, is characterized by a porticoed loggia and the clock tower. It originally was the headquarters of the Spanish general of the Presidi State.

The Parco delle Crociere, more than an attraction, is relevant for its history and what it used to host, i.e. a seaplane base. The Idroscalo di Orbetello was a seaplane base of international importance, with airplane hangars designed by Italian engineer Pier Luigi Nervi. The elegant, geometric structure was destroyed during the War in 1944.

When crossing the lagoon, you will not help but noticing a windmill in the middle of the water! It is the only survivor out of 9 Sienese windmills built in the lagoon during the XV century. They used the force of water and wind to grind the wheat that was transported by small boats called ‘barchini’. The Spanish refurbished and consolidated it, and this is why today it is known as the Spanish windmill.

Finally, Polveriera Guzman is a historic building that the Spanish erected in 1692 to store explosives. It is particularly famous because Giuseppe Garibaldi stopped here to stock up before departing for the Expedition of the Thousand. Today, the building houses the Archaeology Museum of Orbetello. 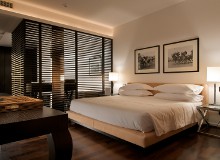 Are you looking for a hotel for your stay in southern Tuscany, a base from where to explore Orbetello, Monte Argentario and the other beautiful destinations of Maremma? Argentario Golf Resort & Spa offers design rooms with panoramic terraces overlooking the lush landscape and Orbetello Lagoon, a modern and spacious wellness center, an 18-hole golf course and a Tuscan restaurant. Visit the official website now.